Khaskar activity continued on the lines already familiar with the addition that a weekly Khaksar newspaper in Sindhi has made its appearance under the title of “Bab-ul-islam”. The movement also possesses a daily Sindhi paper called “Al-kamal”. The events in the Punjab have given a great stimulus to the movement in the province and have been embellished with rumors such as that a son of Allama Mashriqi was among those killed at Lahore. A few petty officials have joined the movement, presumably on ignorance of the standing orders on the subject, and they are being called upon to resign their membership. The Hindu volunteer associations mentioned in previous reports continue. Sikhs have also been vocal and took  the advantage of the Baisakhi celebrations to condemn the Pakistani scheme, and to protest against the alleged burning of a Granth Sahib in Gujrat district and some alleged interference with the “Akhund Path” at a Gurdwara in Kapurthala State.[No. P.25 H(S)/40, HOME DEPARTMENT (SPECIAL), SIND Secretariat, Karachi, 6th May 1940.]

The Khaskars have toned down their activities and the usual parades have stopped. The local students’ Union organized a Student Rally at the Khalikdina Hall on the 1st of September, which was attended by about 200 students. Hashu T. Kewalramani, President of the Students Union, moved a resolution confirming the stand taken by the congress working Committee. A demonstration was organized with the usual flags and placards. A public meeting was held under the auspices of the local Legue of the Radical Congress men to observe an anti-Facist Day. Moulvi Muhammad Yakub Hingoro presided. He stated that the Radical Congressmen were not opposed to the principles of the Congress but to the policy of certain members of the Congress High Command. Din Muhammad Khatib moved a resolution to the effect that the struggle for the emancipation of mankind from fascism could not be seprated from the struggle for Indians freedom. The right grant or not to grant freedom to India did not rest with the British Government but rested with the Indian people. He said that a new enemy of freedom had appeared whose name was Hitler. He was crushing the freedom of the world. Najendra Kumar Vyas, while seconding the resolution condemned Fascism, Nazism and Imperialism, criticized the congress High Command and made some adverse remarks about Mr. Gandhi and Pandit Jawaheral Nehru, which infuriated some of the members present. The meeting ended in an uproar. On the 4th of September the local Union held a meeting to protest against the arrest of Hashu T Kewalramani and Pritam Tahilramani under the defense of India Rules. They have been arrested as they were found in possession of certain proscribed communist pamphlets. Dr.Popatlal A. Bhootpatkar, M.L.A., joined the students in their protest against the arrest of these two persons.[No. P.25 H(S)/40, HOME DEPARTMENT (SPECIAL), SIND Secretariat, Karachi, Report for the first half of September 1940, 21st September  1940.]

Khaskars paraded in Karachi without uniforms. It is reported that intend defying the ban on the wearing of uniforms. If this happens appropriate action will be taken. The Sind Raj Aryan Samelan convened an Anti-Pakistan Conference in Hyderabad which was attended by about 900 persons. Resolution were passed protesting against the Pakistan scheme and threatening that its enforcement would be resisted with all constitutional means, including that of “Defensive Violence”.[No. P.25 H(S)/41, HOME DEPARTMENT (SPECIAL), SIND Secretariat, Karachi, Report for the second half of January 1941, 8th February 1941.]

Five khaksars who marched in military formation at Hyderabad have been prosecuted under the Defense of India Rules.[No. P.25 H(S)/41, HOME DEPARTMENT (SPECIAL), SIND Secretariat, Karachi, Report for the first half of February 1941, 18th February 1941.]

No serious attempt to disregard the ban on the Khaksar organization was made. The Khaksars at Hyderabad and intended to collect in full uniform with the “belchas” and to march to various mosques on the 6th June. The District Magistrate Hyderabad, apprised the local Khaksar leaders of the Government orders and they abandoned their intention. The Khaksars offered prayers in mufti and their leader, Mir Ali Ahmed, in a short speech stated that they had decided to remain peaceful and not to break the law in obedience to the orders issued by their high command and not because they were afraid of the police or the military. He also ordered Khaksars to cease their activities until they received further orders from their high command. In Jacobabad, 9 khaksars were arrested out of whom 6 were released on apology, etc., 2 were sentenced to six months rigorous imprisonment and a fine of Rs. 100 had one was sentenced to two months rigorous imprisonment and a fine of Rs. 100. It is now proposed to release the three persons imprisoned if they apologize and give an undertaking not to defy the ban. No particular developments are expected and there seems to be no general interest or sympathy with the movement. [No. P.25 H(S)/41, HOME DEPARTMENT (SPECIAL), SIND Secretariat, Karachi, 19th June, 1941.]

The local Khaskar leader Mian Ahmed Shah, has issued a statement regarding the present position of the Khaskars in which he has commended the action of His Excellency the Governor of the North-West-Frontier Province in showing leniency to the Khaskars. He also hopes that the Government of India will re-consider their orders and has enjoyed upon the Khaskars to remain peaceful in the meantime. Orders have been issued for the release of the two Khaskars imprisoned recently, provided they give an undertaking to refrain from any undesirable activities in future. They are persons of no importance. [No. P.25 H(S)/41, HOME DEPARTMENT (SPECIAL), SIND Secretariat, Karachi, 19th July, 1941.]

The Fidian-i-islam continues to enroll volunteers. Some ex-Khaksars observed protest fasts at the continued detention of Allama Mashriqi. At a public meeting of the Lasbella State Partly held at Karachi it was decided to from a deputation to wait on the Agent to the Governor General of Baluchistan and the place before him the grievance of State subjects and to request him to extern Murad Jan Gichki and to remove Khan Bahadur Shaikh Nabi Bakhsh, Vazir of Lasbella State, from office. [No. P.25 H(S)/41, HOME DEPARTMENT (SPECIAL), SIND Secretariat, Karachi, Report for the second half of December 1941, 6th January , 1942.]

The Khaksars held a camp at Hyderabad from the 11th to the 13th April. Khaksar leaders had interviewed the Honorable Premiere and the Honorable Minister, Home Department, beforehand and assured them that they had no intention of infringe the orders of Government. [No. P.25 H(S)/41, HOME DEPARTMENT (SPECIAL), SIND Secretariat, Karachi, Report for the First half of April 1941, 21st April, 1941.]

The Khaksars observed “Martyrdom Day” in Karachi, Hyderabad, Sukkur and Larkana. At Sukkur and Larkana crackers were fired and some of the Khaksars appeared in uniforms with “belchas”. Action against them is under consideration. In Karachi 45 Khaksars moved in the streets in mufti carrying ‘belchas’ but did not march in military formations. A public meeting was held in Khalikdina Hall mostly attended by Muslim Leaguers. Salutes were presented in the memory of the Khaksars killed in Lahore on March 19th, Hafiz Ruknuddin, Tipu Sultan, Inayatullah Khan Mashraqui and the prominent Hinud, Sikh, Christian and Parsee leaders. . [No. P.25 H(S)/41, HOME DEPARTMENT (SPECIAL), SIND Secretariat, Karachi, Report for the Second half of March 1941, 4thApril, 1941.]

The Khaksar Camp at Hyderabad, to which I made a reference in my last letter, attracted considerable audiences and there was a varied program of physical exercises. It was emphasized that the Khaksar movement was a social movement and had no quarrel with any community although one of the captions on the entrance gate to the Camp was to the effect that the object of the Khaksar ‘sipahi’ was the rule of the world and the domination of Islam. . [No. P.25 H(S)/41, HOME DEPARTMENT (SPECIAL), SIND Secretariat, Karachi, Report for the Second half of April 1941, 3rd May, 1941.]

The Provincial Khaksar leader, Mir Ali Ahmed Nabi Baksh, remarked that Khaksars were out to serve the cause of humanity but so far they have failed to render adequate service to the sister communities because Khaksars belong to a down trodden community in a slave country Prayers were offered for the release of Allama Mashriqi. There was a procession of about 65 Khaksars in Hyderabad out of whom 30 wore Khaki dress and 21 carried belchas. [No. P.25 H(S)/41, HOME DEPARTMENT (SPECIAL), SIND Secretariat, Karachi, Report for the First half of May 1941, 19th May, 1941.] 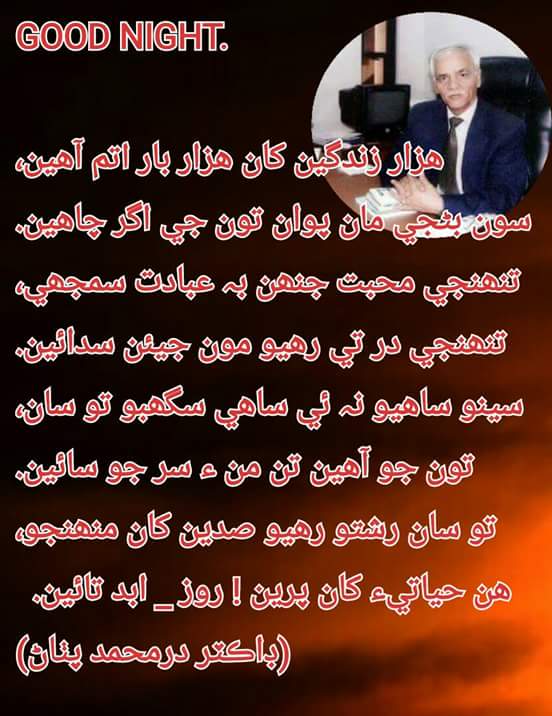 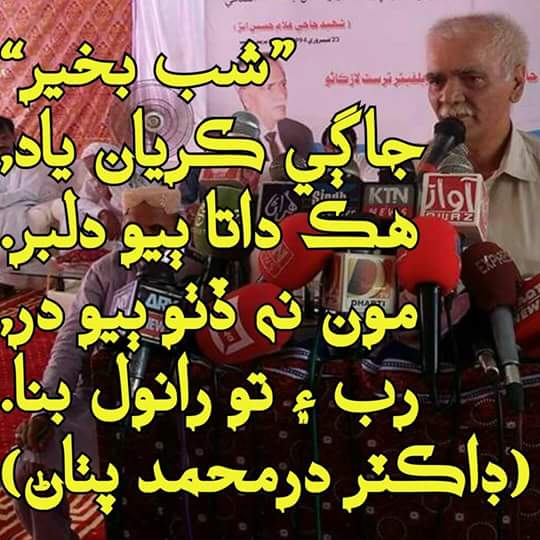 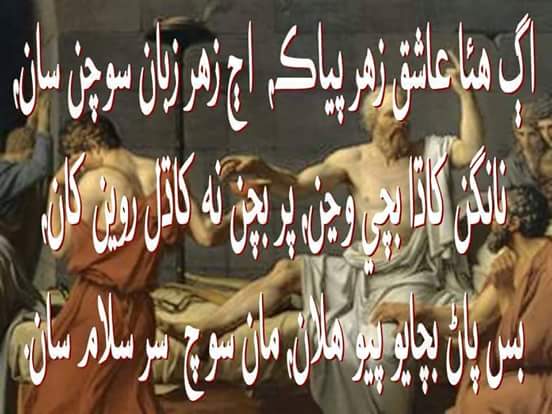